The wonderful story of  GAZZA  &  Evangeline!

The idea of starting HUGGABULLZ came from a sad but hopeful story. It was early 1999 when I was given a full white Bull Terrier pup for my birthday. I named her GAZZA, after my favorite and one of England’s most gifted football players. In the many years to come she proved to be my best and most loyal friend, always standing strong beside me.

My wife Rose and I had a baby wish for quite a long time, though after years of fruitless attempts, we realized that wish wouldn’t be granted without help. We found ourselves running around in a medical treadmill for nearly 2,5 years, without any success. Until that early December morning in 2013, when she whispered in my ear that all our efforts had finally payed off! Little did we know our new happiness would soon be overclouded, when 2 months later we had to say our final goodbyes to our beloved GAZZA. After 15 years she had reached her journey’s end, it was her time to cross the rainbow bridge to be with her forever friends.

Knowing all too well that many Bullies do not even reach that age, I feel very fortunate to have had her by my side for such a long time. It is our strong belief that the ‘bun in the oven’ was GAZZA‘s ultimate parting gift. As if she was saying “You can let me go now, you’ll soon have a whole new responsibility to look and run after!”.

Our daughter Evangeline made her grand entrance on August 4th, 2014. To show her just how special GAZZA was, I designed a plush version and had it made exclusively for her. Due to the countless enthusiastic reactions after posting a couple of photos of Evangeline and her GAZZA on Facebook, I decided to take it into production so other babies, toddlers and big hoomans can have their own GAZZA to cuddle with!

Please click the logo below to chat on WhatsApp. 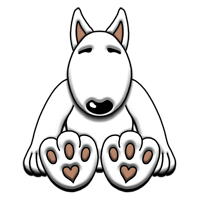 You can send us a message 24hrs a day, we will reply asap!